A REFRESHING COCKTAIL THAT HAS BEEN A FAVOURITE FOR OVER HALF A CENTURY, NOW WITH THE FRESHNESS OF ALPEX GINGER BEER.

From Moscow to New York in a cup made of copper with a mule on it, passing through the Alps.

A cocktail that has its roots in a legend made of casual encounters, when in the Chatham bar in 1940s New York, a distributor of Russian vodka, the owner of a trendy Hollywood club who couldn’t sell his ginger beer and a businesswoman with a stock of copper mugs with a mule engraved on them started talking to the bartender.

They combined the ingredients by adding a little lime and a cocktail was born that “kicked like a mule”.

Fill a tall tumbler glass (highball) or the classic copper mug with ice. Combine vodka with Alpex Ginger Beer and add lime juice; garnish with a slice of lime.

1 Replace vodka with gin to create the famous variation of the cocktail called a ‘London Mule’.
2 Always use freshly squeezed lime for a better flavour.
3 For a spicier hint, add drops of aromatic bitters.

Pizza gourmet. The modern version of the classic pizza, made with special flours, high quality ingredients and refined combinations.
Crouton with Russian salad. With its name and its fresh taste, it’s a perfect match.
Asian cuisine. Alpex Moscow Mule’s ginger flavour pairs well with many spicy and sweet and sour Asian dishes. 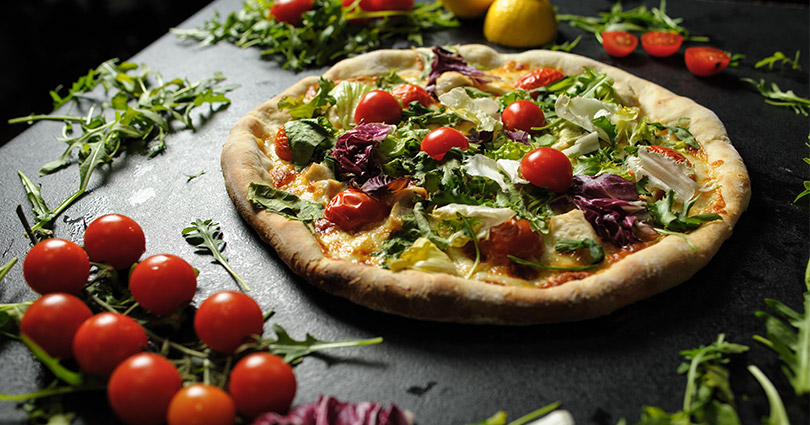